The keynotes talks were, this year again, very inspiring. I especially enjoyed the keynote talks by by Jeffrey Heer and Sheelagh Carpendale because they were not directly involved in biological research but gave us precious insights on research about visualisation.

Jeff Heer was opening the VizBi with his keynote on “Data Visualization Principles”. His lab is interested in measuring the efficiency of different types of visualizations among other topics. One of his former PhD, Mike Bostock, is the guy who developed D3.js, the now so famous JavaScript library for interactive data visualisation. Mike Bostock is now hired by the NewYork Times and creates beautiful interactive visualisations for them. Heer later told me that the success of D3.js mostly came by the fact that they very quickly build an impressive library of examples that users can adapt for their personal uses. A guy in the UK has been so enthusiast about D3.js that he created in a few month most of the examples in that library.
Heer's interests go also much further than data visualisation : he told us that he just launched a company to help cleaning data. Indeed, many data analysis and visualisation processes start with the painful process of cleaning and unifying the data. So, I bet his software could become really successful. I can remember times during my PhD when I was cleaning gene lists in which (stupid) Excel had replaced the gene “March8” by “8th of March”.
In his keynote, Heer did an interesting review of the major findings in the field of efficient transmission of information through visualisation. His slides are available here : http://homes.cs.washington.edu/~jheer/talks/Heer-VIZBI-2014.pdf

Jeff Heer finished his presentation by asking for suggestions of graphs that are widely used in biology but whose efficiency to transmit the message has never been studied. Examples were the sequence logos and the circos graphs.

The third keynote of VizBi was given by Sheelagh Carpendale. Her lab focusses on information visualisation and human-computer interactions. She first addressed questions such as defining the “user” which she prefers to call “persona” arguing that usually, softwares are much better designed if the programmer knows the people who will use the software and are not thought as impersonal, unknown users. She gave interesting examples of alternatives to keywords for database exploration. For example, she proposed elegant solutions for searching in the catalog of a book library which would restore the serendipity process that occurs when going in a library, searching for a book and being inspired by all the elements which are not the content in itself of the books such as they size, the color of the their cover, their location in the library,… Carpendale also presented an on-going project with Microsoft : they are designing an interactive whiteboard which would automatically understand if you are drawing a chart and would in real-time improve your chart, the labelling, providing the data according to the labels, etc.
This device aim is to improve the internal communication by keeping the accuracy of digital presentation while adding the intuitive and natural feeling of drawn sketches for developing concepts and ideas. 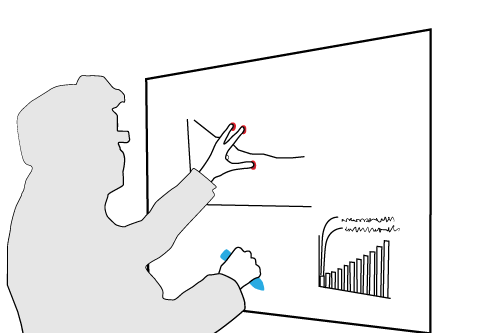 Finally, based on the citation of Henry Ford “If I had asked people what they wanted, they would have asked faster horses”, Carpendale also explained that the software designers have to thing beyond the needs of users and observe the users’ working habits to propose them new solutions that the typical user would not have thought about themselves.

So basically, connecting conferences such as VizBi helps in moving the data visualisation field forward by offering new challenges coming from the needs of biologists and biology benefits from new perspectives on its data.


Something I love at the VizBi is how easy it is to connect with people. They manage to keep this relaxed and enjoyable atmosphere which breaks the walls between the so-called “big shots” and the curious neophytes. Part of this is for example the idea, which I already found genius when I attended 2 years ago, to offer the possibility to all poster presenters to have 1 minute on stage to briefly explain their project : the lightning talks. All conference organisers should take up this idea : it brings the human back in the scientific research and it facilitates the links between the participants because everybody has thus seen each other once. Especially in this conference that brings together people from so many different fields.

This also leads to an interesting question: “Who actually attends VizBi ?" This point is crucial in the elaboration of a conference. Indeed, any visualisation or talk preparation starts by “who is your audience?” because you want to feed your audience with appropriate content.

However, the subject of “visualisation of biological data” brings together people that have very divergent main interests but with a common (secondary) interest in visualisation. The speakers, which are all invited speakers at VizBi, have thus to present their research in an usual way : putting the focus on the visualisation processes and challenges they faced in their research. Some speakers are excellent in this exercise but unfortunately, some of them failed and gave us a recycled talk on their favorite gene or disease. This is probably the drawback of this type of conference where some speakers have not properly understood the reason why they have been invited to talk at VizBi. The big positive counterpart of this diversity is the diversity in itself : I always enjoy a lot discovering new fields of biology that I did not know so far. When the speakers are able to carry us with them, this is truly magic and inspiring.


As an example, I would just pick the talk of Nadia Magnenat-Thalmann on the study of dancer’s hips. She gave me a really nice “closing the loop” feeling by connecting my admiration for the incredible dancers of the “Grand Théâtre de Genève” with the incredible hips virtual reconstruction achieved by the her team.


VizBi was also full of surprises this year with unexpected short talk from Drew Berry, the master of 3D biological animations, who created this Björk videoclip :

He showed us his participation to the "white night" in Melbourne where he created spectacular animations that were projected on the dome of the university library. More about this event can be found here : http://www.smh.com.au/entertainment/art-and-design/drew-berry-dna-dances-as-imagination-goes-viral-at-white-night-20140214-32rgg.html
It was hard to hide my admiration for his work :-)


Finally, this VizBi 2014 was a perfect opportunity to hang out with (new) friends.

@LauraSymul if you're not in the auditorium: come! The Muscoskeletal system of BALLERINAS is being presented ;).
— PGA (@PGA99) March 7, 2014